She is one of the most recognizable names in the world of pickleball, 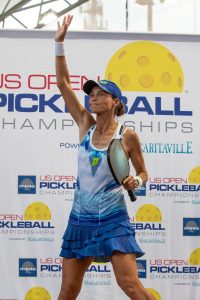 and now Simone Jardim will be joining the sport’s governing body to assist with the game’s ever-evolving rules development.

“I will be helping with any future changes to the rules and hopefully be a bridge between players and the USAPA Rules Committee members,” said Jardim whose impressive resume includes 11 US Open and seven USAPA National gold medals to go along with numerous other awards.

With the continual rise in popularity of the sport, not everyone new to the sport quickly adheres to the game’s rules and nuances. “The fortunate part about pickleball is that the sport is very easy to pick up and to understand. People show up at public parks and are taught by people who were there before them. The unfortunate part is that sometimes it becomes a telephone game, the first time the rule is explained to someone it might have been explained properly but by the time it gets to the 3rd or 4th person it might have been completely misinterpreted. It’s the little details that unless you have had some extensive explanation of the rules, you just don’t know. Because I teach pickleball quite a bit I hear some pretty fascinating rules that don’t exist, but again it is the beauty of the sport.”

Like most talented pickleball players, Simone’s ascent in the sport began on the tennis courts. Simone moved to the USA when she was 18 years old to play college tennis in the SEC at Auburn University. After a brief stop playing for the Tigers, she transferred to Fresno State and then stayed on campus for a few years coaching the Bulldogs. After a quick stop coaching at the College of William and Mary for one year, Simone moved on to the Big Ten at Michigan State as head tennis coach for the Spartans for eight years before moving down to Naples, Florida where she currently runs a pickleball academy.

“When I first started playing pickleball, I thought it was a great hobby and I tried everything I could to get friends to play with me. It was very addicting and one of my favorite things to do.,” recalls Jardim. “After playing a couple of tournaments I realized that this was more than a hobby and that the sport would pick up a lot of former athletes and growth would be inevitable.” 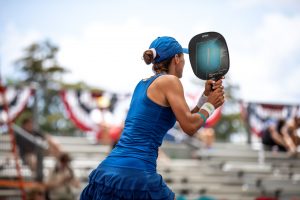 pedigree looking out for the betterment of the sport of pickleball.