During the Pandemic, Pickleball Returns to Its Roots 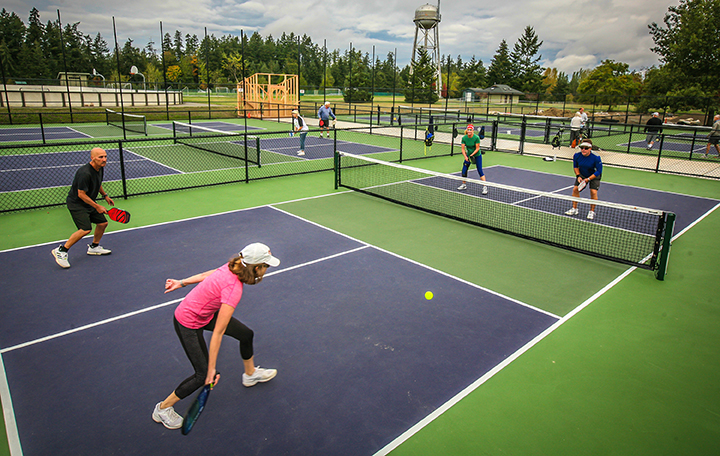 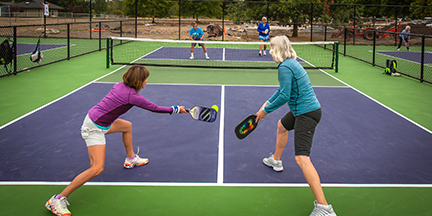 During the past seven months with tournament play now halted by COVID 19 and with many local pickleball venues temporarily closed, one area of play has been growing exponentially, family play. The online sale of pickleball sets and portable nets has been booming.  Pickleball was invented by three dads on Bainbridge Island, Washington, in the summer of 1965, as a way to keep their kids occupied and entertained. It appears that during the isolation imposed by the pandemic, pickleball is providing those same original benefits for families and friends in driveways and cul de sacs throughout the country.

Ironically, in the past seven months pickleball is also booming again on Bainbridge Island. In early March the Bainbridge Island Parks District approved The Founders Courts Project. The Project consists of six new designated courts. What makes this project different from other new courts is a historical plaza at the approach to the courts, featuring a grand archway and kiosks commemorating the history of the game. They are called the Founders Courts for a reason – it all started here.

Barney McCalllum, Joel Pritchard and Bill Bell cobbled together a backyard game using a badminton net, ping pong paddles, and wiffle ball played on a badminton court. Over time and much spirited play, the game turned out to be an all-ages hit, with even a family dog getting involved by running off with errant balls. The trio standardized rules and paddles and the original court still exists along with the original paddles. 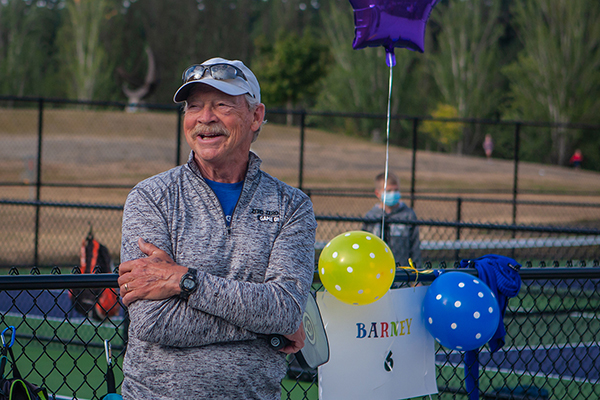 “Baseball has Cooperstown, basketball has Springfield Mass., pickleball has Bainbridge Island” says Clay Roberts who with co-leader Bill Walker and the pickleball community fundraised money for the new courts that opened in August, and the team is now raising money for the historic elements of the project.

Barney McCallum, the last survivor among the three, lived to see the Founders Courts ceremonial groundbreaking in the fall of 2019 but passed away at age 93, before the new courts were completed.

Roberts says McCallum had visited the sprawling Indian Wells, Calif. court complex and was excited to see national tournament play. It wasn’t the high level competitive play or the fact that there are now almost 3.5 million players in the United States, according to the 2020 Sports & Fitness Industry Association (SFIA) report, in what is perhaps the world’s fastest growing sport that pleased him the most. “He was most proud of the fact that he’d created a game where women and men could play together, where children and their parents and grandparents could play together and have fun, – a game where placement beats power.”

“The Founders Courts are about preserving history and the spirit of the game” Roberts says.  Pickleballers nationwide can honor the history by welcoming new players and families, who started playing during the pandemic, to join the local pickleball community.  In addition, he says, “We’d love to see a tradition develop in every community where each game begins in the Northwest corner of the court,” honoring the game’s founding on a small island in the northwest corner of the U.S. 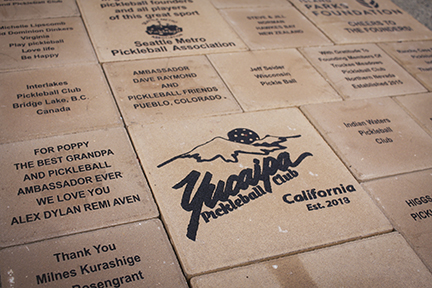 Roberts says, “pickleball grew not just because of Barney and Joel and Bill, it grew because of the incredible efforts of local clubs and ambassadors, such as USA Pickleball, the national governing body of pickleball.”  At the Founders Courts the kiosks will be surrounded by engraved pavers from around the pickleball world.  This is an opportunity to embed your club, your local ambassador or the person who taught you the game at the home of the game.”  To date, over 135 pavers have been purchased.  They are from around the United States and beyond, Colorado, California, Florida, Arizona, Wisconsin, New Zealand, Canada and other far flung places.

Pickleball clubs and players nationwide are invited to make their own mark on the history of the game by purchasing an engraved paver.  The pavers can be ordered through the Bainbridge Island Parks Foundation at this link: https://polarengraving.com/bainbridgepb

“It is an honor to be a part of the continued legacy of our pickleball founders as our organization strives to introduce the sport to families of all ages by introducing numerous programs for adults and youth,” said Phil Mortenson, Board Chair of USA Pickleball. “This once-in-a-lifetime opportunity to purchase a paver to be a permanent part pickleball’s history is something all generations of our members will be proud of.” 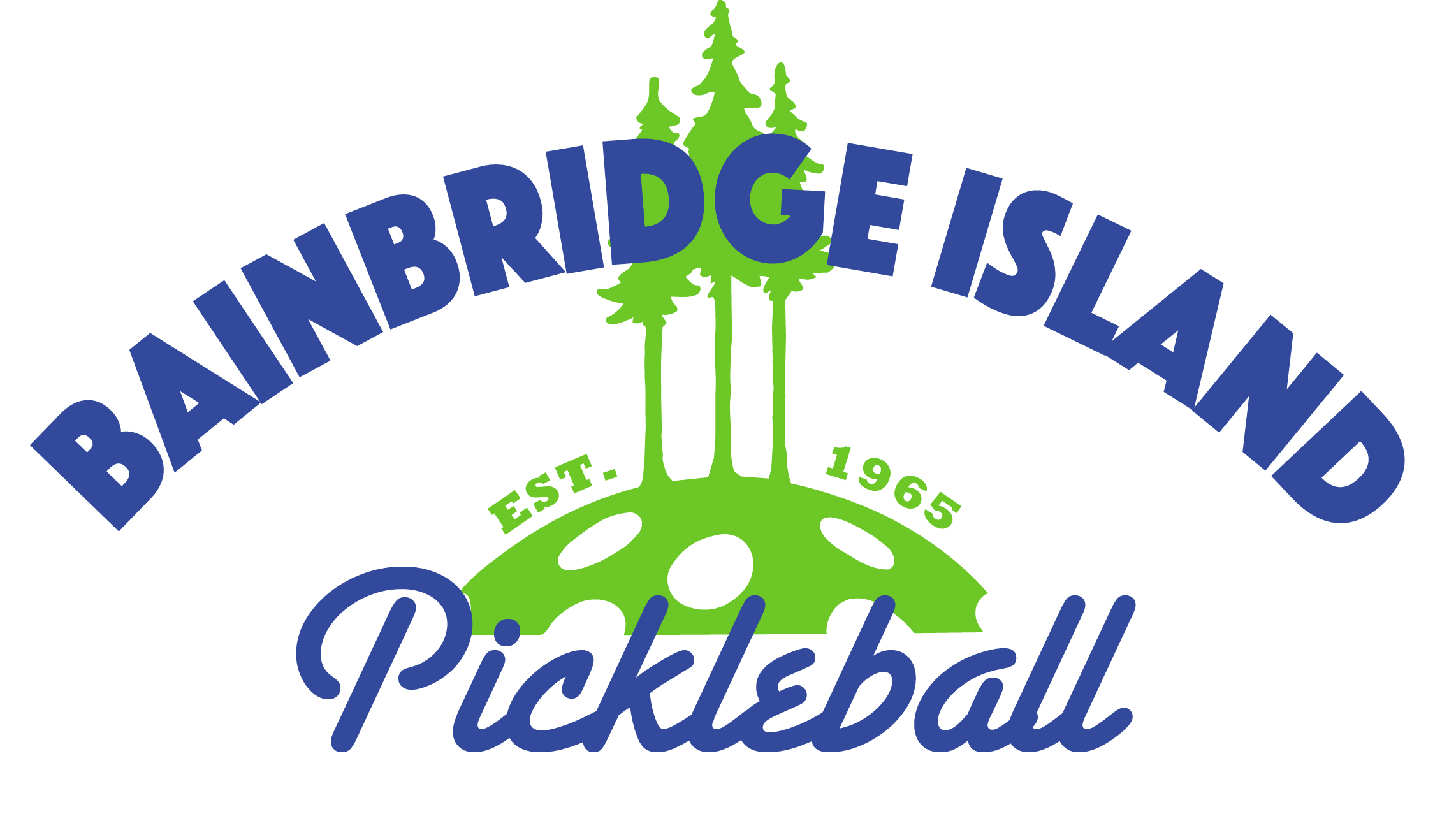 Also, Roberts hopes they will visit.  The island has become a Mecca of sorts for pickleball players showing up from across the country to see where it all started. “People are coming to Bainbridge to play pickleball” he says. “It’s a bucket-list kind of deal, they want to say ‘I played at the home of the game.’”

Commemorative pavers at the Founders Courts pickleball center and interpretive center on Bainbridge Island, WA, can be purchased here. Deadline to order a paver is December 31, 2020. Tax-deductible donations to the project through the Bainbridge Island Parks Foundation can be made here. Learn more about the project here.