California is home to some of pickleball’s finest outdoor facilities, but one in the Sacramento area is drawing rave reviews.

The Sunrise Pickleball Club is a non-profit organization dedicated to organizing and promoting pickleball at Rusch Park in Citrus Heights, California. With members of all ages, skill levels, and backgrounds,  the all-volunteer Board of Directors helps oversee club funds, manages drop-in play sessions 6 days a week, arranges quarterly round-robin tournaments, holiday parties and other social and fun events.

Pickleball started at Rusch Park in 2015, on four existing tennis 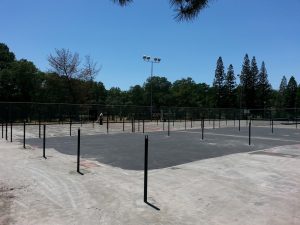 courts. However, play was not optimal as severe cracking in the courts presented a persistent challenge to pickleball; players. But, as everyone knows, those who bring their paddles to the courts are a dedicated group. Play was never interrupted, but the fervent desire to improve playing conditions was at the forefront of everyone’s mind. Eventually, there were about 30 to 40 regular players on the courts.

Local USAPA Ambassador Steve Cooper, leader of the group knew there was a desperate need for additional pickleball courts. So, he initiated talks with the Sunrise Recreation and Park District and discussed converting two of the old tennis courts to six dedicated pickleball courts. After numerous meetings, Steve finally convinced the park district this was a viable project and new courts were on the drawing board. Money was budgeted, blueprints were drawn up and construction was underway. 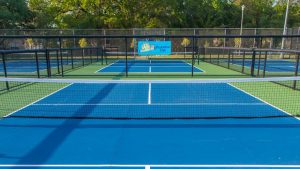 Eventually, six new outdoor courts at Rusch Park were opened for play and were widely viewed as some of the best outdoor courts in the Sacramento area. Later on, the Sunrise Pickleball Club (SPC) was officially formed and began accepting members. Currently, SPC has well over 400 members.  Recently, when the club approached the District with a plan for converting the remaining tennis courts, they requested the club contribute $30,000 toward the construction. A $10,000 grant was secured from the County, leaving $20,000 to raise. A fund-raising campaign began in earnest which consisted of membership dues, donations, a GoFundMe campaign, a Skills & Drills clinic along with several other activities. 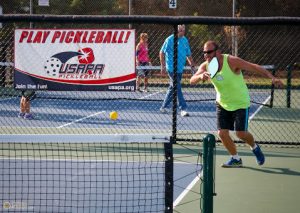 underestimate the passion and determination of pickleball enthusiasts!  Six new similar courts will be added, creating the premier outdoor pickleball facility in the Sacramento area.

Never one to lose momentum or dreams for the future, plans are being discussed for a stadium court, but right now the Sunrise Pickleball Club is empowered knowing that determination and a love of a sport has greatly enhanced a facility in sunny California.