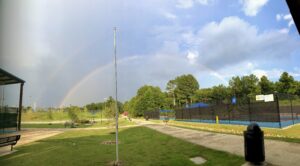 Georgia USA Pickleball Ambassadors held their annual retreat at the Wyomia Tyus Olympic Park in Griffin, Georgia.  Following all state, county and the Department of Public Health guidelines, plans were carefully made to hold the retreat. Tyus Park is a great retreat location as it has 18 dedicated pickleball courts, four which are covered for inclement weather. Several ambassadors arrived on Friday and were hosted to pickleball, pizza, and prizes, all sponsored by the Spalding County Pickleball Association (SCPA). 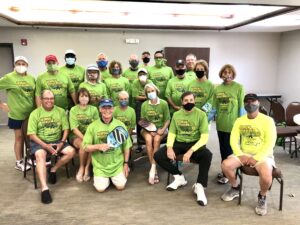 District Ambassador (Georgia Southwest) Chuck Blackshear was the host ambassador for this event and planned the activities held on Saturday and Sunday.  District Ambassadors Tom Richardson (Georgia Central), Laurie Lee (Georgia North) and Elison McAllaster (Georgia Southeast) also contributed to the success of the retreat.  He stated that the driving force for this year’s retreat was to provide an open forum for the more than 10 new ambassadors to the state within the last year to interact with more senior ambassadors.   Saturday’s activities started off with pickleball.  The ambassadors had an opportunity to “Challenge the Champions”, which allowed the visiting ambassadors a chance to play against the 2019 Margaritaville USA Pickleball National 4.5:55+ Champions (Indian Wells, CA), Jim Rogers and Sarah O’Brien.  However, Sarah had a family emergency and was not able to attend.  Sharon Conrad (Fayette County) played in her stead and was up for the task.  There were several teams that challenged them and they showed why they are the champions.  After playing pickleball for the morning, the ambassadors returned to the host hotel for lunch, meetings, discussions and demonstrations.  After the opening remarks, Atlantic South Regional Director, Walt Hooker, spoke to the group about his vision for the region and some of the things that are happening within USA Pickleball.  Bill Hess, Atlantic South Assistant Regional Director, was presented a plaque for his many years of service when he was the regional director.  The meetings covered a plethora of subjects such as the role and responsibilities of ambassadors as well as the district ambassadors, first aid, several benefits of playing pickleball, working with local governments/parks and recreation/YMCAs/private entities/churches/gated communities to get dedicated pickleball courts, social media, corporate sponsorships, 501(c)(3), ladder leagues, and grant programs to name a few.

On Sunday, as the sun and the Georgia heat hastened over the horizon, you could hear the ping of pickleballs and the normal sounds of very competitive play.  Sunday’s meetings and discussions were the continuation and culmination of the weekend’s events.  Kim Spicer (Dougherty County) and Susan Pelchat (Pike County) became ambassadors two weeks prior to the retreat and were elated to attend to learn about their new role and responsibilities, and to meet and greet their counterparts.

Through various grants, sponsorships and donations, all conference meals, binders, t-shirts, giveaways and prizes were free to all attendees.  All of the feedback I have received indicates that the ambassadors are already looking forward to 2021.