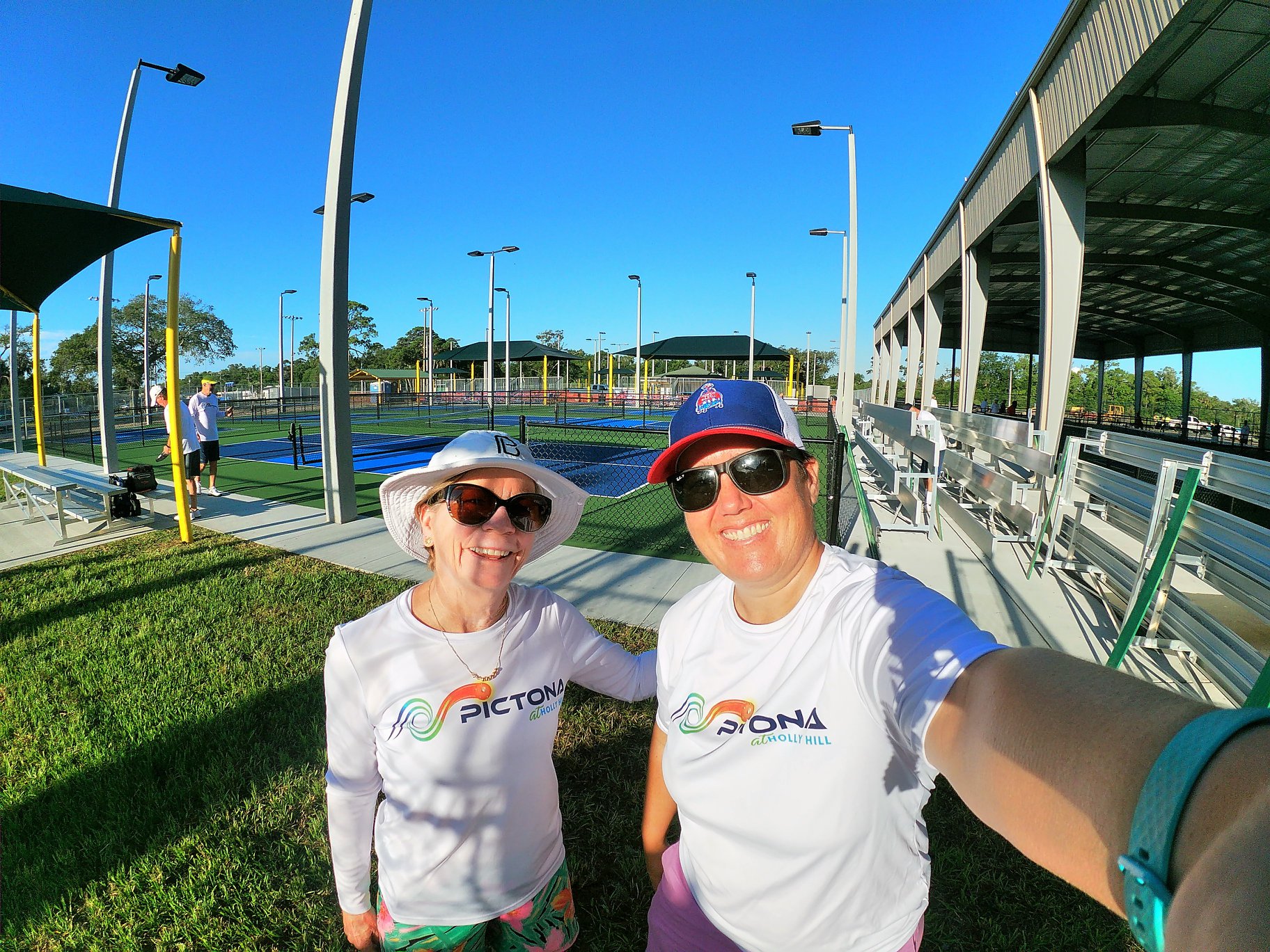 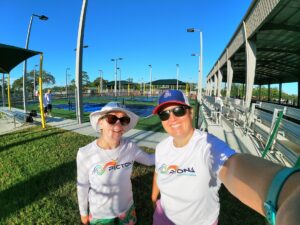 Like many people’s dreams, one of the best jobs to have is one that doesn’t feel like a job at all, and especially when it involved pickleball. That is exactly what Sarah Lockett, a softball athlete who moved to the states from Australia to play college softball, has found for herself in Holly Hill, Florida.

Just two years ago she was on her way home on her bike when she cut through a park to hear a sound that she wasn’t familiar with. It was the sound of pickleball, of course, and after watching a group of players for just a few minutes, she quickly pedaled home to binge watch pickleball videos to learn how to play. Soon after, paddles were ordered and once those arrived, she rounded up some neighborhood friends to play. As she felt a bit more comfortable, she went back to those original courts and quietly sat watching 60 people play before one approached her and asked if she wanted to jump in on a game.

“It felt like I had entered the yard at kindergarten and the playground was full of happy, laughing children who were carefree,” said Sarah about her experience starting to play the game. “I must have played for four hours that day, but it felt like five minutes. My cheeks were sore from all the laughing and my heart felt full. I was hooked.” 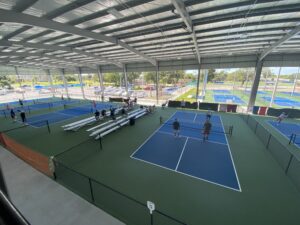 Pictona features 24 pickleball courts, with 12 of them being covered thanks to a grant from AdventHealth.

It was at those courts where she met Mimi Cook who is now the President of the Pictona Pickleball Club, housed at Pictona at Holly Hill. Fast forward to June when we got the chance to meet Sarah in person at Pictona at Holly Hill, she provided a guided tour through the 24-court pickleball complex in where she had secured the job as the Events Manager / Assistant General Manager.

Sarah’s energy and excitement lit up the room as she showcased all that Pictona had to offer for all age groups. Pictona, a not-for-profit club that operates the facility and its programs, was developed and funded by Rainer and Julie Martens of Martens Charities, and the city of Holly Hill. The name was created by Rainer originating from the combination of PICkleball + DayTONA.

Pictona is more than a pickleball facility; it’s a community center focused on physical activity and healthy living and includes table tennis, croquet, shuffleboard, bocce ball, and horseshoes. The facility optimizes viewing of pickleball with a 180-foot balcony above the covered courts and bleachers with shade covers at many of the courts. Pictona has a community garden for children and adults to grow vegetables, and a hydroponic garden that will provide the vegetables served in the Kitchen. The facility is only the means to accomplish what the club wants to achieve. Through pickleball and other physical activities Pictona’s mission is to help children and adults live an active, healthy life by playing pickleball and other physical activities. 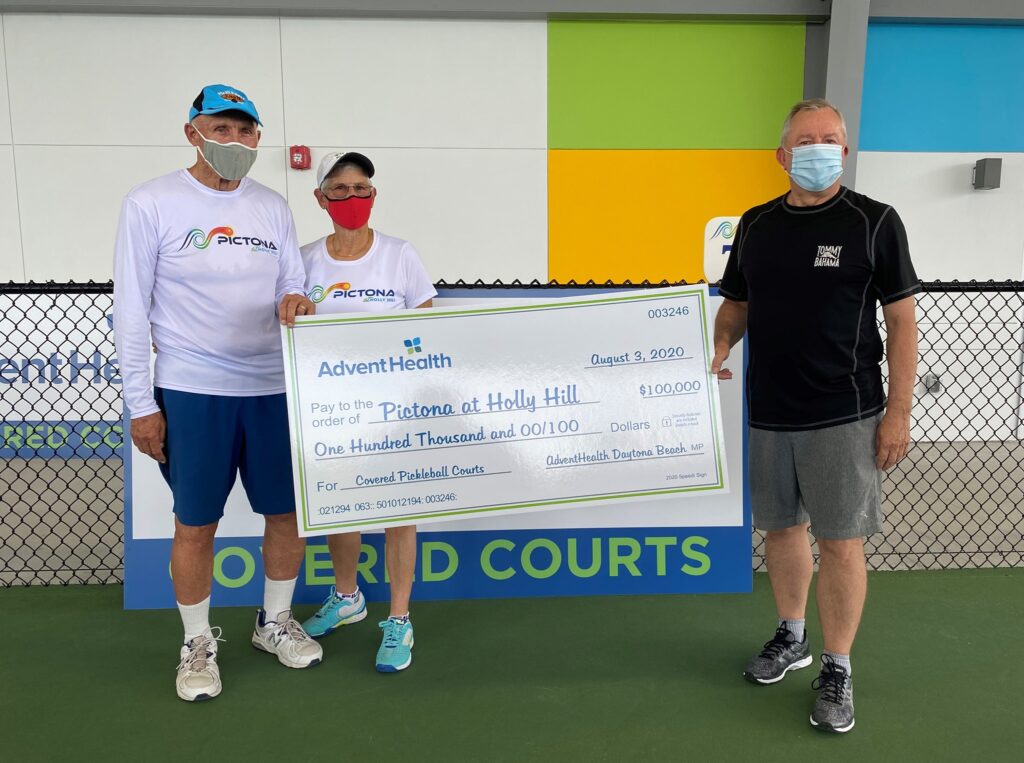 Rainer and Julie Martens stand with a representative from AdventHealth as they announce a 5-year partnership on the $6 million, 24-court complex to improving the health and wellbeing of the Daytona community.

“It’s more than a game, it’s a lifestyle,” said Julie Martens. “We want people to come to play and stay to enjoy all of the other amenities with their friends.”

“Our goal is to promote physical activity and health for seniors, and all ages, in the Holly Hill and Daytona Beach area,” said Rainer. “Pictona is all about community and Sarah’s enthusiasm and high energy gets everyone excited that joins the club.” 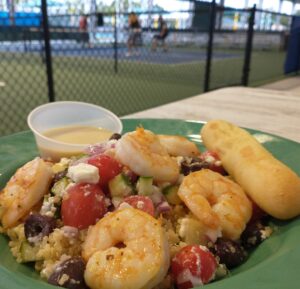 Since opening on July 15th, more than 450 members and players from all over have been coming from all over to play on the courts and enjoy all the other amenities that focuses on a healthy lifestyle. Whether you order a healthy meal from “The Kitchen”, their in-house restaurant, or take a break from Pickleball to play table tennis inside, you can easily find yourself spending hours at the facility socializing with friends.

For more information about an annual membership at Pictona or details about their $10 daily rate, visit Pictona.org. You can also follow them on Facebook where you’ll see Sarah proudly showcasing all the amenities!