Pickleball Courts with a Mighty View of Mt. Shasta 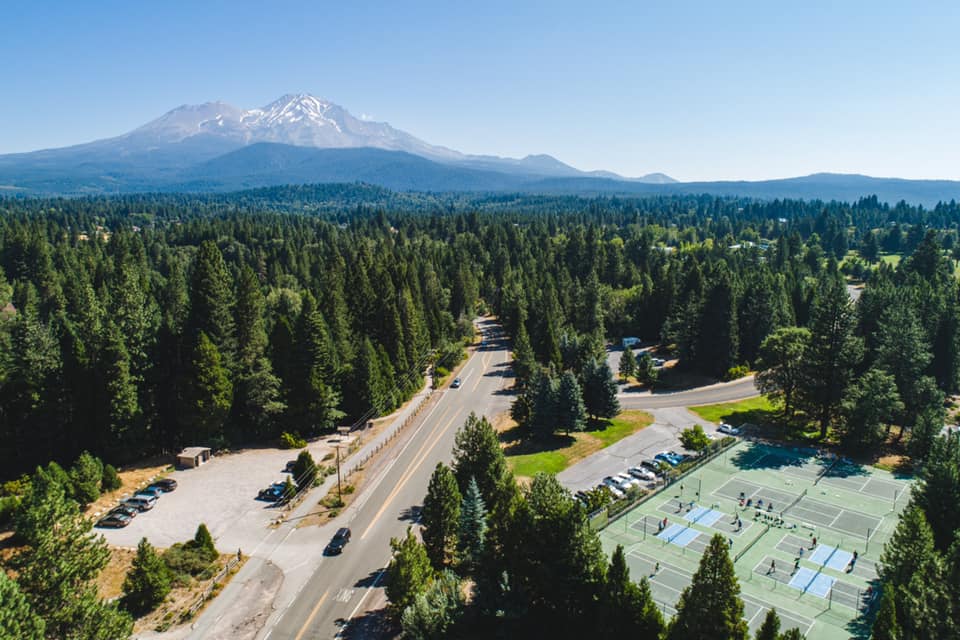 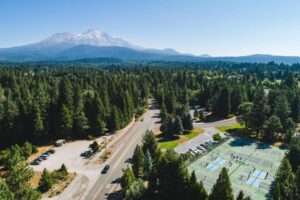 Our road to permanent pickleball courts in Mt. Shasta California (pop. 3500) was approximately a nine-year journey, starting in the spring of 2011 and culminating in the summer of 2020.

Overall, it involved working with a tennis group who’d had dedicated access to the courts for over thirty years; convincing the venue’s management that it was in their financial interest to feature pickleball as one of their offerings; learning how to repair 250 linear feet of deep and wide cracks, and finally, being lucky enough that some of our players are very goal and project oriented, and persuasive and organized leaders.

I had already become addicted the winter before in Mesa Arizona, so I was an easy recruit. Several others who showed up had also played elsewhere and our small group played and then recruited more players. Before long, we grew to a group of 12 or so players, with about 8 showing up regularly. In short order, the group grew to 16-20 and we were in need of more courts. We chalked all four courts and started to realize that between tennis and pickleball activities, we might be running out of space. But there was really no where else in our small town to put pickleball courts.

As everyone who has ever chalked lines for pickleball knows, they don’t last long. Given the growth of our group and the need for more ‘permanent’ courts, we felt an opportunity presented itself. 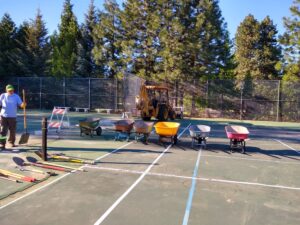 We asked for and were granted an audience with the manager of the resort. We outlined the financial case to him by explaining that pickleball wasn’t some rinky-dink, fly-by-night child’s game. It had a governing board, was international, and the demographics were such that the resort could easily get spill-over business to their golf course, restaurant, and chalets by offering pickleball. Our request was humble, we just wanted to paint the lines we’d previously chalked. By appealing to the manager’s business sense and letting him know that once they could put Pickleball on Places to Play, we were convinced they’d get more business at their chalets and restaurant. In fact, it actually happened. Several years later, we were told by the general manager of the resort that they regularly get phone calls asking whether pickleball is available and have had many bookings due to pickleball.

That was 2013, and we were permitted to paint one pickleball court on each of the four tennis courts. Where a pickleball line (blue) would overlap a tennis line (white), we yielded to the tennis line. It was a small gesture of respect to the tennis folks. We also used the Convert-a-Net product to set the tennis net to regulation pickleball height in both the center and sidelines. Again, we tried to show respect to the tennis folks by not destroying ‘their’ net. And the tennis players in turn modified their play schedule by playing on the days they knew we didn’t have scheduled pickleball play. That was a great boon to us because it meant that on most scheduled days, all four courts were available for pickleball. 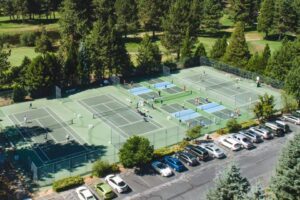 Fast forward seven years to 2020: we now have a mailing list of around 45-50 people, with at least 16-24 players showing up regularly. We’ve even had the opportunity to introduce pickleball to several tennis players. Some decided to stick with tennis, others play both sports regularly, and a few have become ‘converts’. In 2018, we formed a club and our president, Dr. Ken Brummel-Smith, a seasoned organizer

and go-getter, used his diplomacy to persuade resort management and the tennis players to agree to let us convert one tennis court to four permanent pickleball courts. We held a fundraising tournament specifically to get the funds for the project. Then, with the willingness and skills of retired contractor Ken Wood, and a generous and incredibly helpful group of volunteers, construction began in the spring of 2020. In a mere six weeks we were playing on beautiful, permanent pickleball courts with a view of the mighty Mt. Shasta. The icing on the cake was when one of the regular tennis players made it a point to tell us what a beautiful job we had done on our courts.

Here are the take-aways, as I see it, to enable getting permanent or multi-use pickleball courts in a tennis environment: