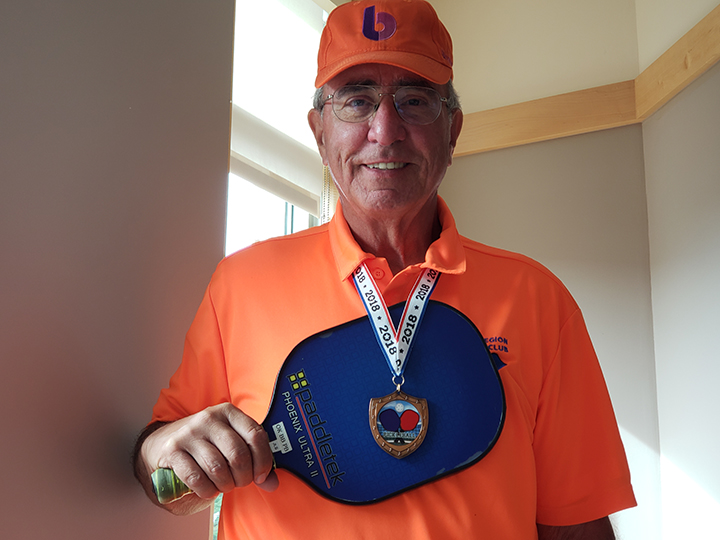 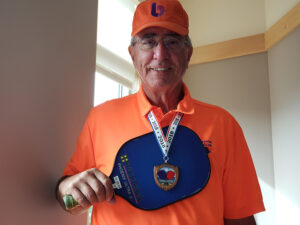 Joe Santoro has been a USA Pickleball board member since February 2020. He first picked up the sport in 2015 playing at the Bonita Bay Club in Bonita Springs, Florida. In the winter he spends his time playing at Veteran’s Park in Naples and June through November he enjoys playing at Foss Field in Wolfeboro, NH.

At the age of 76 Joe competed in 22 tournaments and earned 16 medals at the 4.0/3.5 skill level. Since his first tournament “debut” in 2016, Joe has earned more than 40 medals in total. He has played in every U.S. Open in Naples since its inception.

In addition to being an avid pickleball player, Joe is a USA Pickleball certified referee, the USA Pickleball Atlantic Region Referee Coordinator, and the founder of two annual pickleball tournaments in New Hampshire.

“The friendships and camaraderie that the activity generates is what I enjoy most about pickleball,” said Joe. “When explaining the sport to someone in one sentence, I tell them that it’s an enjoyable way to exercise the brain and body.”

As the USA Pickleball Atlantic Region Referee Coordinator, he works throughout all six New England states to train candidates for certified referee status. In addition, while in Naples each year, he helps train referees at Veteran’s Park where he often plays.

Joe and his wife of 53 years, Donna, who is a retired registered nurse, have resided in several states over their more than five decades together as Joe’s career spanned both military and civilian occupations. Joe joined Air Force ROTC in 1962 during his freshmen year at Tufts University and eventually earned the rank of Colonel as the Cadet ROTC Detachment Commander.

After graduation and attending law school, Joe entered active duty for four years but remained in the U.S. Air Reserves long enough to retire in 1995 as a colonel. His last assignment was Chief of the Logistics Readiness Center at the Pentagon during the first Gulf War.

Joe’s primary civilian activities include positions as a plant department manager, director of human resources, and a marketing manager at the headquarters level of two international corporations. He is a retired certified public accountant with an MBA who has founded and sold several small business corporations. In addition, he has served as a small business consultant, become a member of more than a dozen boards of directors, testified before the Internal Revenue Service on matters related to taxation, written several authoritative articles and manuals on accounting, and served as a subject matter expert witness in numerous court proceedings.

Joe is known nationally as an author and lecturer who for 25 years provided more than 85 continuing professional education seminars annually to more than 30,000 certified public accountants, attorneys, and federal/state government officials. An adjunct professor of accounting at two colleges, Joe has received several national awards including being named “Speaker of the Year” for his ability to entertain as well as educate audiences and honored as the “Accountant of the Year” by the National Society of Accountants for his professional expertise.

Joe and Donna take great pride in what their two sons have accomplished. His oldest son, Christopher, is a federal judge for the U.S. Department of Justice in Washington D.C. where he is the Chief Immigration Judge for the U.S., responsible for supervising 55 federal court jurisdictions. Christopher served 20 years in the U.S. Air Force reserve and retired as a colonel.  Joe’s youngest son, Jason, a former U.S. Navy Lieutenant Commander and a helicopter pilot, worked for both Northrup Gruman and General Dynamics as a consultant to the Pentagon. Jason’s sport’s passion is golf, but Joe hopes Jason will soon develop greater interest in pickleball.

Joe is eager to be involved with multiple committees within the USA Pickleball organization.

“As a member of the USA Pickleball Board, I hope to help with the steps needed to have pickleball recognized as an Olympic Sport,” said Joe.