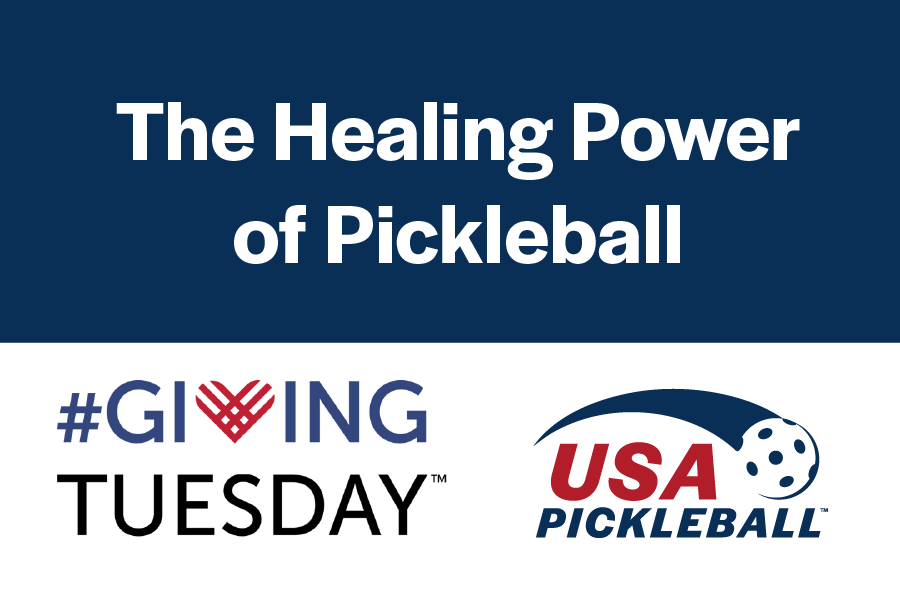 This #GivingTuesday, we share our gratefulness for how pickleball has helped the lives of many. It is because of our members and the generosity of the pickleball community that allows USA Pickleball to continue to share these touching stories, provide grants to communities and organizations and shine a light on the junior players across our nation.

Here are two poignant accounts that demonstrate the healing power of the game. With today being #GivingTuesday, we hope these stories touch you and guide you to help support USA Pickleball in its mission to grow the sport including programs and access in communities across the U.S.

Learn more about our grant programs HERE and consider DONATING TODAY. Thank you!

THE HEALING POWER OF PICKLEBALL 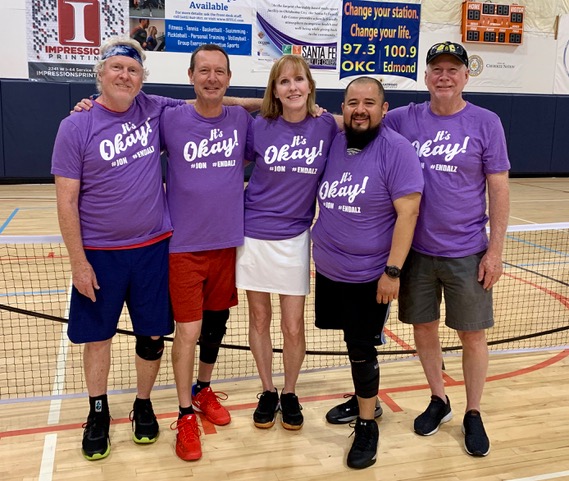 Kristin Davis had never heard of pickleball when her husband, Jon Harpman, first played the sport at the Santa Fe Family Life Center (SFFLC) in Oklahoma City, OK a couple of years ago. Little did they know, that it would greatly impact their lives in remarkable ways.

In their second year of marriage at the age of 54 in 2017, Jon was diagnosed with Alzheimer’s and it quickly sidetracked his game and their mutual love for staying active as previous competitive athletes. They both shared common interests of running and traveling, and Alzheimer’s forced them both to pause.

“As the disease took away Jon’s ability to run, drive a car, do simple math, and to hold a job, we dwelled on the devastation of the disease,” said Kristin as she recalled the earlier days of the disease. “Jon started spending his days on the couch and it was difficult to see any hope on the horizon.”

One day, a friend invited Jon to play pickleball at SFFLC. It took only that one morning and Jon was hooked. Soon he was playing pickleball nearly every day and very rarely spent time on the couch. His energy level went up, he was more engaged and most importantly, he was happy.

On the court, Jon often reminds other players not to sweat the small stuff by saying, “It’s okay!” when a ball is missed or called out, when a game is lost, or when someone is just not having a good day on the court. His contagious quote, “It’s okay!” has spread quickly through the pickleball community, and his friends at SFFLC came up with the idea to create a t-shirt featuring his quote and promoting awareness of Alzheimer’s. 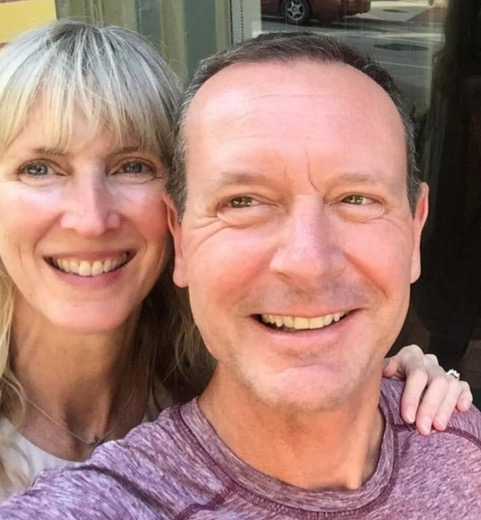 Members of the Greater Oklahoma Pickleball Club (GOPC) started selling the t-shirts and offered to donate 100% of the proceeds to a charity of Jon’s choice, which was an easy decision for him to want to give back to the SFFLC that provided him the indoor space for him to find his pickleball community.

The t-shirt sales raised more than $4,000 in Jon’s honor to help fund the construction of the complex’s first elevator.

Ryan McClure, SFFLC Operations Manager, said, “We are very grateful. The elevator will help numerous people with disabilities to access the facility and participate in sports, fitness, and social activities which are so important for everyone.”

Construction has begun, and the elevator is projected to be completed by the end of this year. Jon is truly an inspiration to their entire community. 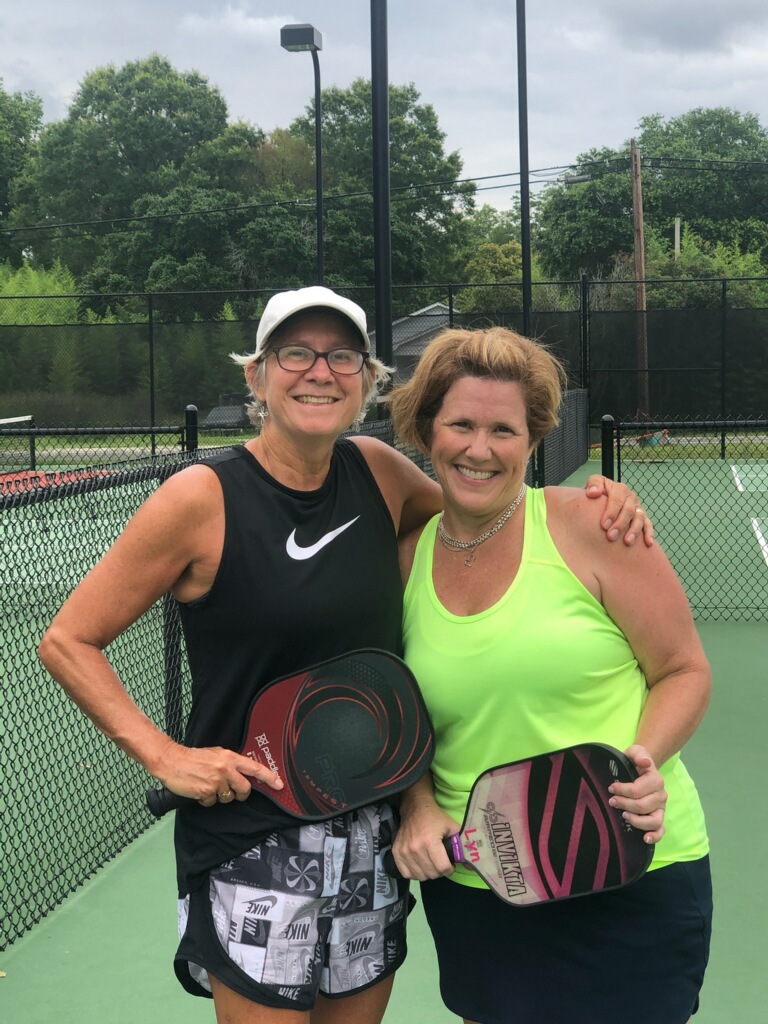 Allison Morris, wife of Lou of 31 years, and mother of Trey and Sarah, has a history of multiple brain injuries that first started at the young age of 5. She suffered a string of bad luck with numerous injuries from falling off a swing, flipping off a picnic table and landing on her neck, swim diving head-first onto concrete, and multiple sports injuries.

“All of my brain injuries just added up. I ignored the signs and symptoms, so they just got worse,” said Allison.

When Allison lost about 80% of her memory due to ECT treatments and spent about a month in the hospital, her doctor had suggested she learn something new to help with her brain and memory. The grandmother of one of her son’s friends had suggested she start playing pickleball.

After the treatments, she knew who her husband and kids were, but wasn’t sure how old they were and how long she had been married. “It was crazy learning things all over again and to see how technology had taken over,” said Allison.

Shortly after coming home from the hospital she picked up her paddle, in which originally she thought it was her kids’ instead of her own, and found an old email that had details about the courts that she used to play on when she first picked up the sport to help her memory. After arriving to the courts once again, she didn’t recognize anyone, but they knew her.

One of those people was Lyn Hibino, who immediately fell in love with her fun spirit on the court and encouraged her to keep coming back to play. “After hearing Allison’s story and all that she has been through,” shared Lyn, “it makes me feel guilty if I ever complain about a sore muscle or a body ache. She’s like a superhero to me and her tenacity is worth admiring on and off the court!”

Before meeting Lyn and others that she now plays with on the courts, her injuries had changed her from the outgoing, and socially involved person that she was, to someone that had lost interest being around people. It was then on the pickleball courts that she had found her purpose and a group of friends that were so patient and understanding to not only participate in tournaments with her, but to continually reteach her the game and help care for her when she was sick.

“This pickleball community has meant the world to me and has been such an awesome blessing,” said Allison. “I have a new normal. I am still learning and just have to take one day at a time. Thank you to all the pickleball players in our community that have been there for me every step of the way.”

Transferring Your Skills to Pickleball

As an organization, USA Pickleball is thrilled to have an opportunity to spotlight players from…

Effective date will be 25 January USA Pickleball and IFP have released 3 items including:…