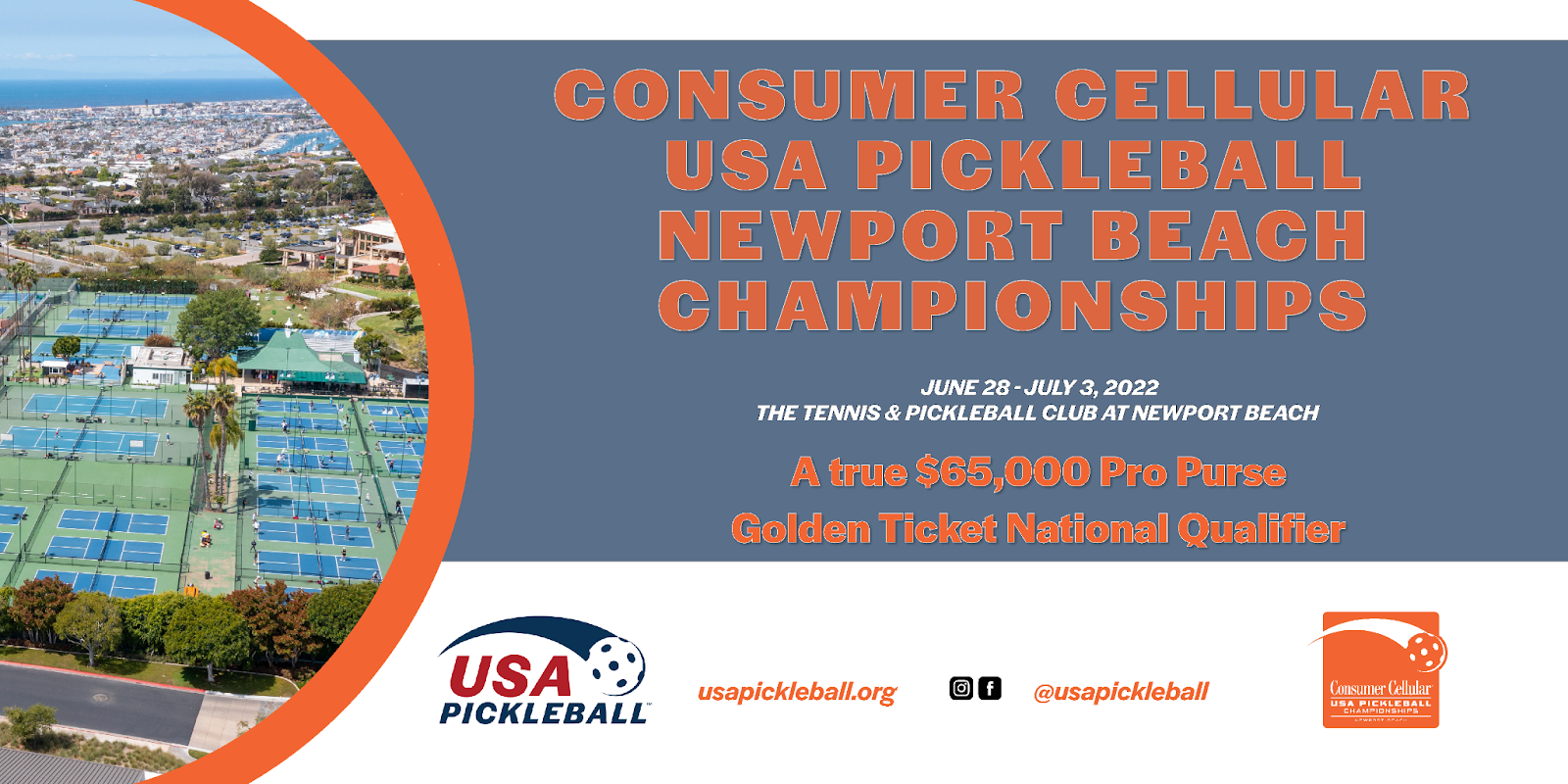 This week, the West Coast pickleball scene kicks off its summer championship series with the Consumer Cellular USA Pickleball Newport Beach Championships! The tournament will be held at The Tennis and Pickleball Club at Newport Beach from June 28-July 3.

The tournament boasts a true $65,000 Pro Purse with Golden Ticket National Qualifiers for amateurs in all brackets. There will be a full broadcast schedule throughout the tournament for viewers at home to get a glimpse of all the action. Get familiar with the list below to make sure you don’t miss a moment of one of the best tournaments of the summer:

TRAVELING TO NEWPORT BEACH FOR THE TOURNAMENT?
Consumer Cellular has set set up rates at nearby hotels with different options for all different tastes. Head to https://lodging.usapickleball.org/Event/41db/ to book your Newport Beach Championships stay today!

There are plenty of new faces at this year’s Consumer Cellular USA Pickleball Championships, and Mattias Johansson is a name to remember!

Mattias is a Touring professional on the APP, PPA, and USA Pickleball Tour and is currently ranked #1 in World Pickleball rankings. Mattias has an extensive history both playing and coaching tennis before his transition into pickleball. As a former professional tennis player in 2019, Mattias was ranked #1 in USTA National Singles rankings after winning the National Hardcourt championships as well as reaching #17 in the world  in 2020 (ITF Ranking). He has 28 years of head coaching experience at Vanguard University and UC Riverside. Mattias was inducted into Vanguard’s Hall of Fame as a player and a coach in 2014 and was also inducted into the National Association of Intercollegiate Athletics Hall of Fame  (NAIA) in 2015.

He ended his 2020 season with a 22-0 record before the COVID-19 pandemic turned his focus on to pickleball. Since becoming a professional pickleball player in June of 2021, Mattias has won 18 professional tour singles titles, including National Championships as well as the US Open.

Mattias is IPTPA certified, but he is also the only person in the world with all of following certification:

USA Pickleball: How long have you been playing pickleball?

Mattias: I started playing in the summer of 2020 socially with my wife.

What drew you to the sport of pickleball? How did you get involved in the sport?

Mattias: I was pursuing a #1 world tennis rankings at the ITA senior tour when COVID-19 hit us all and shut down the sport of tennis. Pickleball was the only sport still open for the general public. I thought it was a good reason to get out of the house and socially interact with people and exercise. It did not take long before I became a pb addict!

What do you love most about the sport?

Mattias: There are so many different layers of the game; everyone can play and have a lot of fun, but it is also very difficult to master all different areas of the game. I still feel that I learn new things every week which makes me curious to see what I will discover next week or next month. It’s a very fascinating game! And of course [I enjoy] the social aspect of the game; it is one big pb family!

Where do you play locally in Newport Beach?

What are some must-sees in the area for those players visiting Newport Beach?

When Parris Todd was just 5 years old, she asked her parents for a tennis racket. Surprised at the request since they knew nothing about the sport, they wondered where to even purchase tennis equipment. Not long after, Todd’s journey began, one training session after another, revealing a talent and passion for the game that triggered more hours on the court to develop her gift.

At age 8, her father took her to the renowned Bollettieri Tennis Academy in Florida, where the competition escalated and Todd discovered a desire to compete with the best in the world. Todd began to set goals, leading to numerous titles and trophies. Blossoming into a top junior player, she advanced into USTA girls 10’s and 12’s  age group, ranked #1 both regionally and nationally and advanced into the top 14’s, 16’s, and 18’s — at only age 13. Todd was the youngest player to take three Women’s Open Titles. On her 14th birthday, Todd was asked to become an alternate for the Professional World Team Tennis League (WTT) Orange County Breakers, whose league record advanced them into the playoffs. Todd began to play the PRO ITF tour at age 14, traveling domestically and internationally to compete. In 2017, she won the Newport Beach Queen of Hearts Charity Open, Mercedes Benz of Scottsdale Southwest Open, and in 2018, the Match Point Tennis Academy. To date, Todd holds more than 85 tennis titles.

While building her tennis ranking, Todd received an opportunity she could not pass up to pursue her fashion career with one of the biggest retailers in the U.S. and launched her company and brand Waisted, USA. A different kind of challenge sprang forth as a businesswoman to run a fashion company with demands of staying on top of trends to designing contemporary sportswear and streetwear for young women. As the pandemic slowed down the globe, pickleball emerged and summoned her to the courts.

It wasn’t long before her tennis talents crossed over. Since then, Todd has enjoyed herself more than ever on the courts, and the rest is history. Her ultimate dedication, determination, and championship spirit are quickly advancing her both on the court and in life. Todd aims to be an example for kids and adults worldwide, believing that if you cultivate your talents through faith, diligence, always being grateful for every opportunity, and having a good attitude, nothing can stop you from achieving your dreams.

It’s no doubt that Parris Todd is quickly becoming a pickleball household name all around the country. With her being a Newport Beach native, USA Pickleball sat down with the pro before the Consumer Cellular USA Pickleball National Championships to hear just how much the sport means to her.

Which courts would you recommend to players who are visiting Newport Beach?

Parris: TTC Newport Beach, which has new courts and more new courts are being built. It’s the pickleball

What are some must-sees in the area for those players visiting Newport Beach?

Parris: Laguna Beach and Fashion Island for shopping and dining.

Why did you decide to move from pro tennis to pro pickleball?

Parris: I had no intentions of playing pro pickleball, it was time and chance. It just happened.

STAY CONNECTED WITH USA PICKLEBALL ALL TOURNAMENT LONG!
Our social media channels will be sharing content throughout the tournament to keep you updated on results throughout the week. Follow along on all social media @usapickleball and use #USAPickleball / #RoadToNationals.