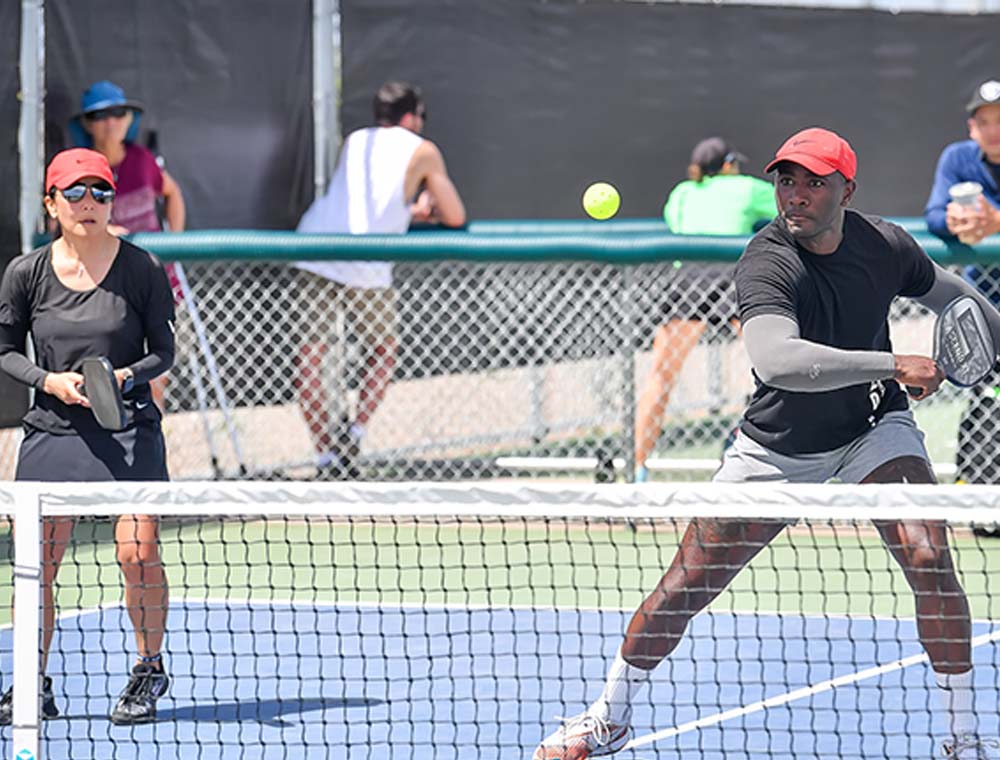 USA Pickleball is pleased to announce it has approved two new sanctioned tournament formats, in effect as of April 1st, 2022:

Details about both new sanctioned formats are below and you can visit USAPickleball.org for a full description of all USA Pickleball Approved Tournament Formats.

Tournament directors of selected tournaments will have the option of sanctioning their tournament without requiring referees for matches.  As the National Governing Body of the sport, USA Pickleball realizes the validity of tournament matches refereed by referees is important when hosting sanctioned tournaments as part of our National Championship Series (NCS) events and the Diamond Amateur Series events as players are competing to qualify for the golden tickets for each series.

USA Pickleball also understands when considering sanctioning a tournament there are concerns of having enough referees to be able to effectively host a tournament with less than 300 players, so we have developed the “no-referee sanctioning” option to allow for these sanctioned tournaments to take advantage of the other perks of hosting these events.

“Since last year, USA Pickleball has been evaluating a new no-referee option that provides a sanctioning opportunity for smaller tournaments, and those that have no ties or connection to the National Championship Series, to run their tournaments in conjunction with USA Pickleball,” said Karen Parrish, Managing Director of Competition. “This option will allow tournaments to sanction that otherwise would not have the appropriate number of referees to run their local tournament.”

The no-referee sanctioning option is not available for the following tournaments:

“To maintain the integrity of the rules and the sport, tournaments opting to use the no-referee option must name a USA Pickleball Certified Referee as Head Referee, who will be present at the venue to answer player questions and address on-court issues,” said Mark Peifer, Managing Director of Officiating. “We believe this option will be looked upon favorably by members and tournament directors alike.”

To be consistent with the no referee option above, the referee requirements for MMP tournaments that are run as round robin only, regardless of how many registrants there are, will also require a Head Referee at the venue.

USA Pickleball is pleased to announce it has approved a new tournament format, called Mini-Singles.  Mini-Singles is a fun new version of half-court singles that is played on a standard pickleball court using only half of the court per point. The unique feature of Mini-Singles is that at each end, only one of the 2 courts, (i.e., the right [even] or the left [odd] court), is “in play” during a rally. The courts that are in play are determined by the required player positions. Each player’s position is determined by their individual score. This always applies, whether the player is serving or receiving.

“The new play format has proven to be very popular in recent years and we wanted to explore how we could integrate it for sanctioned play”, said USA Pickleball’s Managing Director of Competition, Karen Parrish. “Sometimes referred to as “skinny singles,” mini-singles and various versions of the popular format have been utilized by tournament directors. After reviewing many different versions, the USA Pickleball approved mini-singles format we have selected is the most prevalent as the format that will be offered to tournament directors.”

Mini-Singles is not meant to replace the existing Singles formats of tournaments.  Tournament directors may offer both formats or just one format.