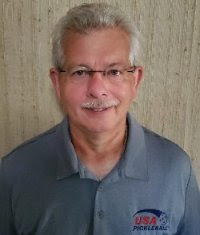 Steve Stone is the new Director of Ambassadors, effective October 12, 2020. Steve is a Des Moines, IA native and multi-sport enthusiast who was introduced to pickleball in 2010, as the Iowa Senior Games was looking to add the sport in their offerings. He searched to learn about the game, how it is played, how it began, the rules, and much, much more. Motivated to help others learn about the game, early in 2011, Steve would apply for and receive approval as an Ambassador for the official governing body, USA Pickleball Association. The initial area was Central Iowa however he found himself spreading the word about the game everywhere he went through his travels. Steve’s persistence in growing the game would ultimately result in his being appointed a USA Pickleball District Ambassador for the State of Iowa, which would eventually lead to his appointment as an USA Pickleball Regional Director for the Middle States Region (comprised of Iowa, Illinois, Minnesota, Missouri, and Wisconsin).

Steve is taking over for Claudia Fontana, who led the Ambassador team during the significant Regional Championships participation growth and during the challenges of the pandemic. We thank Claudia for all of her contributions to USA Pickleball, wish her the best of luck and look forward to seeing her on the pickleball court!