One of the greatest aspects of pickleball is that it can be played nearly anywhere. And while playing pickleball isn’t much fun by yourself, setting up a court can be a do-it-yourself project that’s incredibly rewarding. With a little know-how and the right space, in no time you can be on your way to enjoying a temporary or even permanent place to invite friends for a little friendly competition. 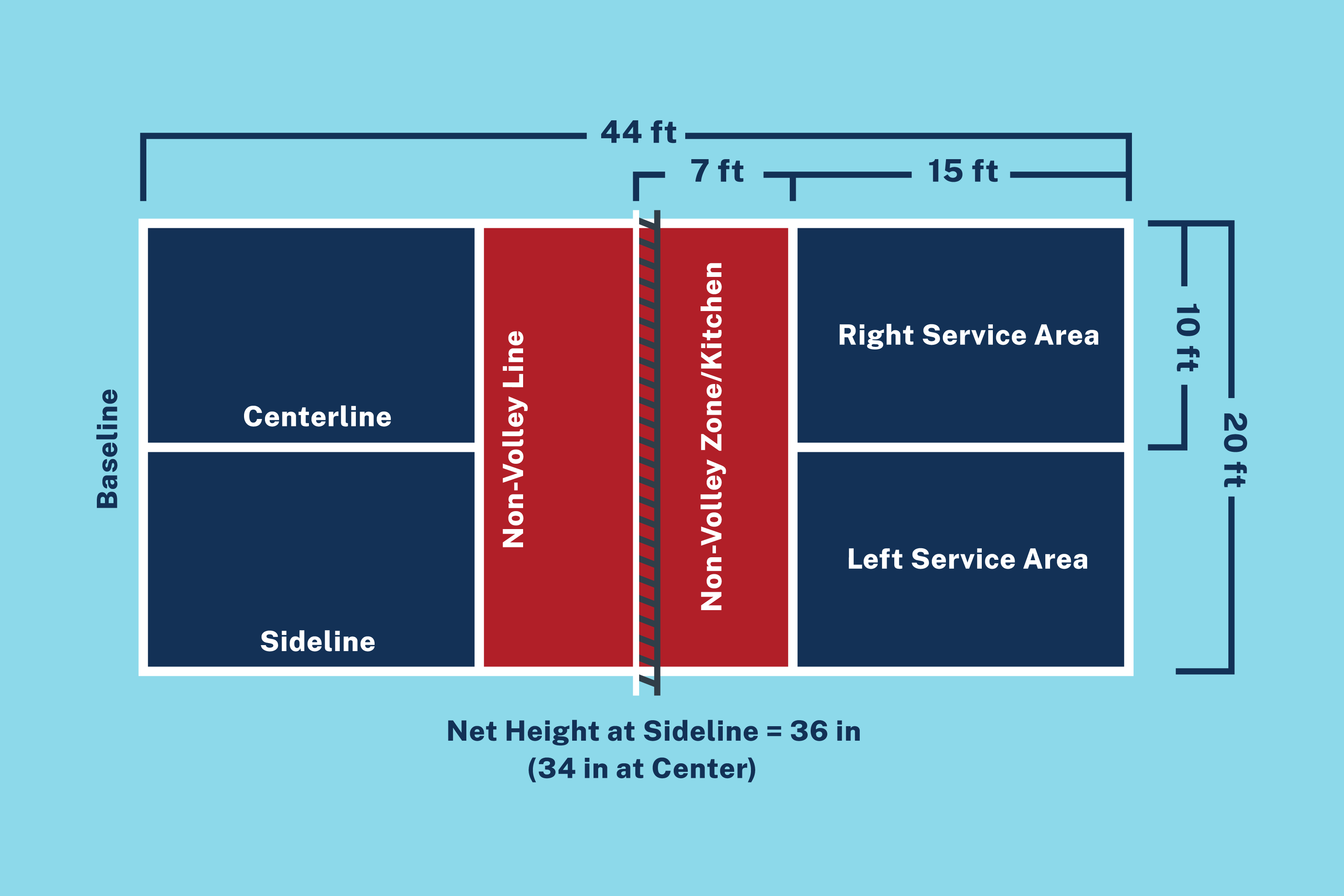 When laying out a temporary (or permanent) pickleball court, it is important to know the correct specifications as indicated in the diagram. It is also important to note that if you are setting up an outdoor pickleball court on an existing court surface that is oriented in the normal north/south direction, do not place the pickleball courts at right angles to the court. If you do, one player will be looking directly into the sun in the early morning or late afternoon which can certainly prove to be safety hazard.

Baselines: sit parallel to the net at the end of the court.

Sidelines: running the length of the court.

Non-volley zone (NVZ): the area on either side of the net bound in by a line parallel to and 7 feet from the net and two sidelines.

Centerline: extends down the center from the baselines to the NVZ, dividing the court.

Any hard surface (i.e. concrete or asphalt) will suffice for outdoor gameplay, so long as it’s free of debris. Grass will not allow the ball to bounce, but driveways or cul-du-sacs can work fine with enough space. Ideally, the surface area should be about 30 feet by 60 feet. For more professional and permanent outdoor court surfacing, there are sport surfacing systems and services available.

The net can be made out of any mesh material that will not allow a ball to pass through. It should be at least 21 feet 9 inches long, stretching from post to post; from the bottom edge to the top, it should be at least 30 inches wide. The posts should be 22 feet apart, and no more than 3 inches in diameter. Once the net is suspended from the posts across the center of the court, it should be 36 inches tall at the sidelines, and 34 inches tall in the center. The top edge of the net should have a cord or cable and it should be covered with a 2-inch tape.

The lines, netting, and space requirements for indoor pickleball play are the same as outdoor, but different lighting, fencing, and surfacing options are available, and should be considered. Indoor play allows for fluorescent lighting options that cannot function outside like HID and LED lights would. Indoor play also allows for different flooring options that are not feasible outdoors, like hardwood or rubberized surfaces. Fencing considerations can also vary more with indoor courts, as the surrounding environment does not pose as much a risk as it may outdoors.