History of the Game

After playing golf one Saturday during the summer, Joel Pritchard, congressman from Washington State and Bill Bell, successful businessman, returned to Pritchard’s home on Bainbridge Island, WA (near Seattle) to find their families sitting around with nothing to do. The property had an old badminton court so Pritchard and Bell looked for some badminton equipment and could not find a full set of rackets. They improvised and started playing with ping-pong paddles and a perforated plastic ball. At first they placed the net at badminton height of 60 inches and volleyed the ball over the net.As the weekend progressed, the players found that the ball bounced well on the asphalt surface and soon the net was lowered to 36 inches. The following weekend, Barney McCallum was introduced to the game at Pritchard’s home. Soon, the three men created rules, relying heavily on badminton. They kept in mind the original purpose, which was to provide a game that the whole family could play together. 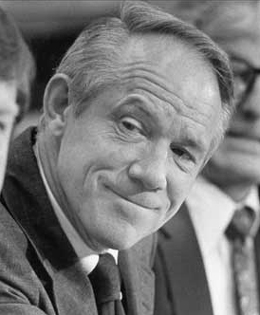 The first permanent pickleball court was constructed in the backyard of Joel Pritchard’s friend and neighbor, Bob O’Brian.

A corporation was formed to protect the creation of this new sport. 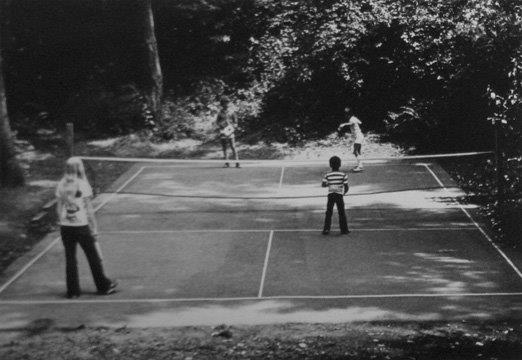 The National Observer published an article about pickleball followed by a 1976 article in Tennis magazine about “America’s newest racquet sport.”

During the spring of 1976, the first known pickleball tournament in the world was held at South Center Athletic Club in Tukwila, Washington. David Lester won Men’s Singles and Steve Paranto placed second. Many of the participants were college tennis players who knew very little about pickleball. In fact, they practiced with large wood paddles and a softball sized whiffle ball.

The book, The Other Raquet Sports, was published and included information about pickleball.

The United States Amateur Pickleball Association (U.S.A.P.A.) was organized to perpetuate the growth and advancement of pickleball on a national level. The first rulebook was published in March 1984.

The first Executive Director and President of U.S.A.P.A. was Sid Williams who served from 1984 to 1998. He was followed by Frank Candelario who kept things going until 2004.

The first composite paddle was made by Arlen Paranto, a Boeing Industrial Engineer. He used the fiberglass/nomex honeycomb panels that commercial airlines use for their floors and part of the airplane’s structural system. Arlen made about 1,000 paddles from fiberglass/honeycomb core and graphite/honeycomb core materials until he sold the company to Frank Candelario.

Pickleball was being played in all 50 states.

Joel Pritchard passed away at age 72. Though he was Washington State’s Lieutenant governor from 1988 to 1996, he is probably better known for his connection to the birth of pickleball.

The game of pickleball was introduced for the first time in the Arizona Senior Olympics through the efforts of Earl Hill.  The tournament was played at Happy Trails RV Resort in Surprise, AZ and drew 100 players. It was the largest event ever played to that point. Over the next few years the event grew to nearly 300 players.

There are 39 known places to play in North America listed on the Pickleball Stuff website. This represents 10 States, 3 Canadian Provinces and about 150 individual courts.

Pickleball was included for the first time in the Huntsman World Senior Games, held each year in St. George, Utah during October.

A new corporation for the sport was established as USA Pickleball Association (USAPA).  Mark Friedenberg was named the first president of the new USAPA and the first Board of Directors included:

Steve Wong (former USAPA Webmaster) created the first USAPA website that went live in March. Website activity continued to increase as the popularity of pickleball grows and the features of the website increase.

USAPA cooperated with several web sites to have them discontinue their Places to Play links and consolidate all their entries into the USAPA database creating a single reliable source for players to find sites to play.  Today this website is: places2play.org

One of the originating founders of the sport, Bill Bell passes away at 83.

Pickleball was included for the first time at the National Senior Games Association (NSGA).

There are now 420 places to play in North American as listed on the USAPA website. This represents 43 States and 4 Canadian Provinces and about 1500 individual courts. This does not account for those places that are adding courts at private homes.

ABC’s Good Morning America aired live, in-studio segment on pickleball that included a brief demonstration.  This was the first mass media exposure for the sport.

The first USAPA National Tournament for players of all ages was held in Buckeye, Arizona, November 2-8, 2009. The tournament drew almost 400 players from 26 states and several Canadian provinces.

USAPA establishes the Grant Program to assist players in creating new sites for new players. By the end of 2013 the program has accounted for over 1,400 new sites.

To help foster the growth of the sport on an international level, USAPA established the International Federation of Pickleball (IFP) organization and corresponding website (ifpickleball.org).

USAPA starts the year off with a record 4,071 members.

USAPA re-brands with a new logo and red, white, and blue color scheme that is more consistent with other US national sports governing bodies.

According to the Sports and Fitness Industry Association (SFIA), there are now just over 2 million pickleball players.

Total number of courts per Places2Play continues to grow and breaks through 10,000 courts and finishes the year at 12,800 for both indoor and outdoor courts.

USAPA reports it now has more than 17,000 members.

The first US Open Pickleball Championships were held in Naples, FL and included the first nationally televised broadcast of pickleball on CBS Sports Network.

More than 4,600 locations are now listed on Places2Play.

The Super Senior International Pickleball Association (SSIPA) was created and partners with USAPA and sanctions all their tournaments.

USAPA expands the number of USAPA regionals from 8 to 11.

With over 1,300 players, the USAPA National Championships sets a record for participants and for the first time, a 2-hour segment of the event airs to a nation-wide audience on CBS Sports Network.

USAPA membership doubles in two years and is 22,000 by December.

Total number of courts per Places2Play locations is nearly 7,000 and there are nearly 21,000 known courts across the U.S.

The USA Pickleball partners with Desert Champions, LLC with a multi-year deal and moves the National Championships to the world-renowned Indian Wells Tennis Garden in Indian Wells, CA. Registration for the newly branded Margaritaville USA Pickleball National Championships explodes to over 2,200 participants.  The event featured over 17 hours of live-streamed content to a nation-wide audience on ESPN3 and a 1-hour segment aired nationally on ESPNEWS.  The event also provides the highest cash purse ($75,000) in the history of the sport.

USAPA Facebook team carried several live matches of the National Championships on Facebook and had a total reach of over 1.5Million viewers.

The Sports Fitness Industry Association 2019 report indicates pickleball continues as one of the fastest growing sports in the U.S. as participants reaches 3.3 million.

The last of the three originating founders of the sport, Barney McCallum passed away at 93.

The Margaritaville USA Pickleball National Championships places a greater emphasis on spectators and the spectator experience. A VIP lounge and live video screens were placed just outside the stadium court where fans could enjoy the action from the food and beverage areas. The event drew nearly 28,000 fans.

USAPA rebranded as USA Pickleball, aligning more consistently it with other US sports governing bodies and our USA Pickleball National Championships. The brand re-launch also includes a new, modern logo and an updated website. The new name, logo and website are designed to strengthen USA Pickleball’s worldwide image as the official pickleball organization in the U.S.

Currently, the sport of pickleball is exploding in popularity. There are now nearly 8,500 locations on the USA Pickleball’s Places2Play map. The spread of the sport is attributed to its popularity within community centers, PE classes, YMCA facilities and retirement communities. The sport continues to grow worldwide as well with many new international clubs forming and national governing bodies now established on multiple continents. 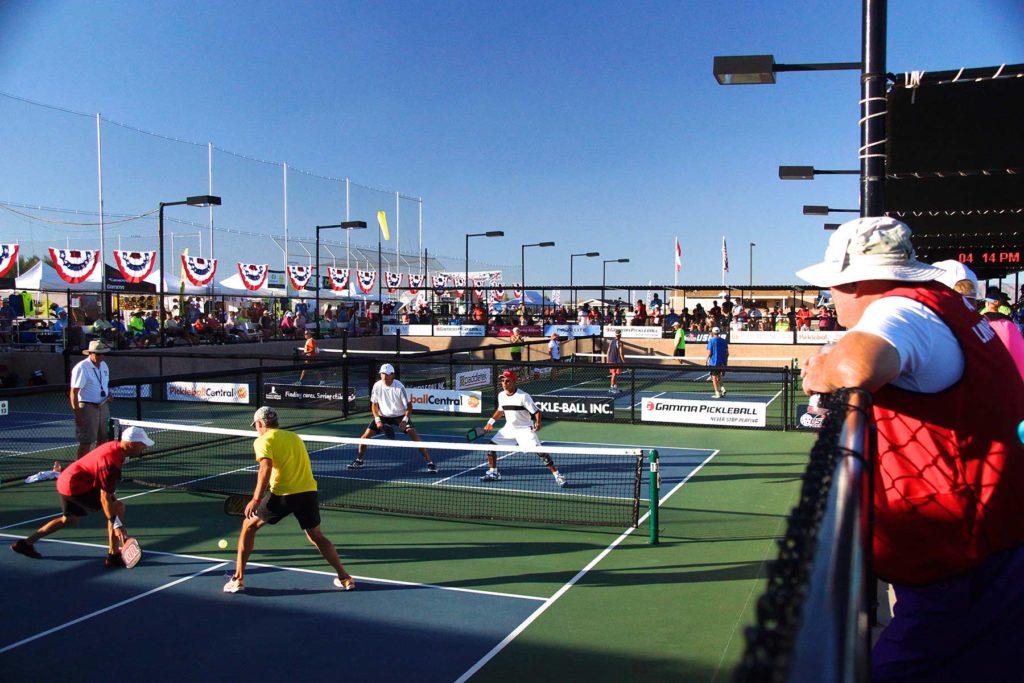 Videos: The Pickleball Story and an Interview with Barney McCallum

The first video is 7 minutes and was recorded on August 11, 2013. Congressman Joel Pritchard, Barney McCallum, and Bill Bell invented the game of pickleball one summer afternoon in 1965 on Bainbridge Island, WA. In Barney's own words, here is the story, along with views of the original (and oldest) pickleball courts in the world.

The second video is 14 minutes and was recorded December 3, 2009 at Barney McCallum's home in Seattle WA.

Joel Pritchard, Bill Bell and Barney McCallum are unfortunately no longer with us. USA Pickleball was honored to have Barney attend the Nationals Championships in November, 2013. He was court side for a number of matches and was the special guest speaker at the ambassador's dinner. In addition, Barney was also able to travel to the 2018 Margaritaville USA Pickleball National Championships at the renowned Indian Wells Tennis Garden. The experience of seeing first-hand how far the sport had advanced brought tears to his eyes. We were grateful to Barney for taking the time to attend and provide us, not only with the history, but the reasoning behind many basic rules as well as the origin of the sport's name. We hope you enjoy watching the above videos.

Pickleball has a very interesting name, especially since no pickles are used. Accounts of how the name originated differ. (1)According to Joel Pritchard’s wife (Joan), she started calling the game pickleball because “the combination of different sports reminded me of the pickle boat in crew where oarsmen were chosen from the leftovers of other boats”. (2) However, according to Barney McCallum, the game was officially named after the Pritchards’ dog Pickles who would chase the ball and run off with it. According to McCallum, “The Pritchards had a dog named Pickles, and you're having fun at a party, right? So anyways, what the hell, let's just call it pickleball.”

Others claim both accounts may actually be true. In the early years, no official name was assigned to the game. However a year or two after the game was invented, the Pritchards purchased a cocker spaniel and named it Pickles. As the game progressed, an official name was needed and “pickleball” was it.